In this post, we will look at Minimum Wage in Nigeria. Here we will highlight various controversies surrounding the new Nigerian minimum wage as well compare the rate to other countries.

Even, while trying to understand this reason, the situation has, however, brought to the light the kind of leaders Nigeria is having, especially when it has to do with the situation, where workers will have to attempt to shut down tools before their wages can be reviewed upwards by the Nigerian government. In March 2019, year, the Nigerian Senate Approves N30,000 As New National Minimum Wage. 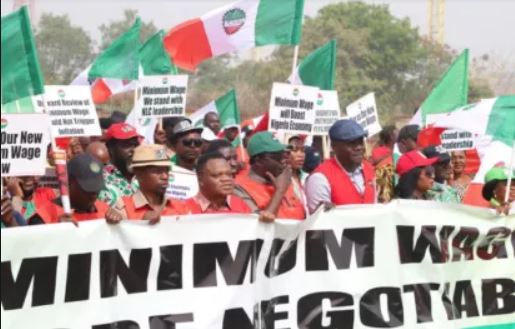 Nigeria, for instance, is currently regarded as one of the poverty-stricken nations with about 86 million of Nigerian citizens living in abject poverty, and the figure is according to the statistics from the World Poverty Clock. What this simply means is that about. 44  percent of Nigeria’s 197 million citizens are all living in extreme poverty.

Again, according to some information from the same World Poverty Clock, it is estimated that Nigeria, by the year 2030, over 119 million of Nigerian citizens would be living in abject poverty.

Going by the Bill and Melinda Gates Foundation, Nigeria is said to have overtaken India as a nation with the largest number of abjectly poor citizens. According to the Foundation estimation, by the year 2050, about 40 percent (40%) of the world’s abjectly poor people will be the citizens of the Democratic Republic of Congo and the Federal Republic of Nigeria.

The new Minimum Wage in Nigeria falls at about N30,000 monthly even though as we speak, the President has not signed in to bill. That is, the minimum wage is about $80 per month, according to the current exchange rate.

A negotiating committee that comprised of the union representatives, and the government as well as, the private sector, has commended members of the committee for their recommendation. That recommendation was to increase the minimum wage to N30,000 naira, which is almost equivalent to £82,72 euros, from N18,000, and was said to have been realistically fair, as well as, implementable, although the recommendation was to be studied by the executive members of the federal republic of Nigeria, and then returned to parliament for final approval.

Nevertheless, there was some sort of agreement that, Nigeria’s labour unions, that had threatened to paralysing Nigeria’s economy of more than 197 million people with their massive, and their open-ended strike, would rather on February 2019 polls, deliver their members’ vote to the sitting President Muhammadu Buhari in a presidential poll in return for the minimum wage increase.

That being the case, the following day, the information minister had to give different information against the idea, saying that, the Nigerian federal government had not agreed with the N30,000 naira, as recommended.

The information minister also confirmed that the said recommendation was to be studied first. More so, the public officials, who also stand in the way of the President Buhari’s strategy of winning the popular vote with the wage increase were the state governors, who disagreed with the President Buhari’s strategy of winning 2019 presidential poll, say they were already struggling on how to pay their civil servants and public servants with the recommended N30,000 minimum current wage.

The Ebonyi state governor, Mr. David Umahi, however, has sounded a note of warning, saying that, the N30,000 naira minimum wage for Nigerian public servants may not work.

Accordingly, a good number of the states within the federation are currently experiencing different problems, and as a result, most of them may not be able to pay salaries. Hence, nobody really knows if the N30,000 minimum wage for civil servants would be implemented.

Minimum Wage in Nigeria Compared to Other Countries

Having said all that I have to say concerning Minimum Wage in Nigeria, it is also worthy of note that, the Nigerian government, via the National Council of State, will give its final decision on the N30,000 minimum wage for Nigerian civil servants.

This However, was made known by the minister of labour and employment, Chris Ngige. According to him,  the federal government will never take a unilateral decision as regards the minimum wage for civil servants in the country, he also noted that, for such decision to be carried out, and the state governors in the country have to be, as a matter of importance, carried along in such process. That out of the way, let us consider the comparison of Nigeria’s minimum wage to that of other countries.

List Of Minimum wages Of Other countries Other Than That Of Nigeria:

Itel A14 Price in Nigeria, Specs and Review

10 Functions of Nigeria Bank of Industry

How to Improve Public Procurement in Nigeria