In this post, we will look at the Problems and Prospects of Trade Union in Nigeria. Trade union has played enormous role in the socioeconomic development of Nigeria, given its statutory function in working to ensure that the overall welfare of the Nigerian work-force is guaranteed.

Trade union is an organization made up of workers in both private and public organization. These workers have decided to come together in furtherance of their interest given the ill treatment mated on them by their employers.

Which ever way you view the activities of Nigerian trade union,  it is my belief that once there is attractive conditions of service, there is bound to be creativity on the part of the workers, and there will be commitment to work in order to  realize the organization’s goal.

Therefore, trade union has contributed to the overall growth of business organizations im Nigeria and the advancement of this nation.

Trade union believes that a growing organization is a sum total a cordial relationship between the employer and the workers, so what it does is to protect the interest of workers in order to ensure cooperation and commitment towards realizing the objective of the organization. It will bargain for the term and conditions of service in favour of the both parties, but in most cases such bargains must include workers pay,  hours of work and benefits. Strike is a major weapon of organized trade union.

However, inspite of its good intentions for a smooth running of an establishment in respect to the protection of its members, there are some challenges facing it’s smooth operation.

In most cases the leadership of the union may  be found wanting in carrying out their statutory function. They could be bought over at the detriment of the entire workers, where the interest of the workers can be sacrificed on the alter personal greed.

Most times too, the leadership of the union lacks the necessary skills and prowess in discharging their statutory functions, thereby defeating the workers interest. Union leaders are not train to carry out their functions hence, the management of the organization may end up treating the workers as slaves since there is no one to bargain on their behalf.

Another grave issue is that of ‘small size syndrome’. Where the size of the union is small, the organization management may prove not to recognize them, and they (the union) at that level may be incapacitated to  bargain for their rights.

Sometimes, lack of funds could be the major challenge facing the union. When there is no money to advance their cause in a workplace, it becomes their major proble. And because of lack of funds, union leaders are susceptible to being influenced by  those who are not part of the workers and once this happens the leadership of the union may be weaken as the interest of the workers are jeopardized.

Problem of internal dememory has been over time plagued the trade union. Power supremacy struggle within the leadership of the union has negativity affected the growth of the union.

Furthermore it a given that when different unions come together there may be some sort of conflict among the unions, where one may prove to claim supremacy over the other hence posed threat to the industrial order of the organization.

No doubt, in such circumstances there abound to be leadership weakness as most of the decisions taken by the leadership may turn out to affect the union negatively.

These and many other challenges have undermined the success of the trade union. Most of this limitations confronting trade union can be conquered by addressing the problem of its internal democracy through restructuring the leadership of the union.

No organization can survive without an effective leadership, and for such organization to progress there is need to address the issue of rivalry within the leadership strata of the union. Moreno, the union leaders should be reminded of their statutory responsibility of harmonizing the organization through the protection of the interest of their members.

They should resist every outside influence, and not to succumb to the whips of the management of the organization in which they are working so as to be able to take their stand in ensuring that the welfare of their members are guaranteed.

They must take steps to address every challenge staring at the union if they must continue to contribute to the growth of the organization in which they work and in protecting the interest of their workers and as well contribute to the advancement of the Nigerian society.

If need be, the leadership of the union and the workers should setle grave issues among themselves by agreeing on measures that will move the union forward.

They must agree that, inspite of the outside influence or organization management attempt to infrige on their right, they will not succumb to them. There should be program of training and retraining for the union leaders in the area of leadership skills as well as sensitization program for the workers.

How To Become a Vulcanizer in Nigeria 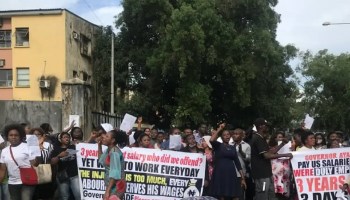 
20 Business Ideas You Can Start Without Capital


8 Functions Of UNESCO In Nigeria