The Nigerian Navy is the marine arm of the Nigerian Armed Forces. It is one of the largest in Africa and has thousands of personnel in addition to the coast guard.

The marine was responsible for administration of ports and harbours, dredging of channels, buoyage and lighting. It also ran ferry services, touring launches and other small crafts that used the various creeks and other inland water ways as transport routes.

The organisations involved in these functions were the Nigerian Ports Authority, which was responsible for running the ports and ensuring safe navigation.

Another was the Inland Waterways Department which later took over the running of ferries and touring launches. The third was the Nigerian Naval Force, made up of mostly reserved Royal Navy officers and ex-service personnel who had been posted to the Nigerian Ports Authority from the then Nigerian Marine.

The primary function of the Nigerian Naval Force was to train personnel and put in place appropriate infrastructure for the planned Navy.

The Nigerian Naval Force became a full Navy in 1959 when Queen Elizabeth II granted permission for the force to use the title “Royal Nigerian Navy”.

The title was later changed to Nigerian Navy after Nigeria became a republic in 1963. The constitutional task of the Navy was expanded in 1964 after the 1958 Ordinance was reviewed.

Read Also: How to Apply For Nigerian Navy

The New Navy Act of 1964 charged the Navy with the Naval defence of Nigeria for the first time in addition to the routine functions of assisting in enforcement of Customs laws, making hydrographic surveys, and training officers and men in naval duties.

The Navy had since then pressed for a review of the constitutional roles of the Navy and this yielded results when the Armed Forces Decree 105 (now known as the Armed Forces Act), was incorporated as part of the 1999 Constitution under a new law, which led to the Navy being given military and constabulary roles especially in the oil and gas sector of the Nigerian Maritime economy.

Structure of the navy

There are three operational commands directly under the Naval Headquarters. It also has one training command, a logistics command and many autonomous units. These are:

The Western Naval Command HQ, located at Apapa in Lagos, covers the sea and coastal areas from the Nigeria/Benin border at Long 002o 49’ E to Long 006o E in Delta State, from the Nigerian coastline to the limit of the nation’s EEZ. It Is made up of 11 units.

The Eastern Naval Command covers the sea area from Long 006o E in Delta State to the Nigeria/Cameroon border at Long 0080 30’ E, and from the Nigerian coastline to the end of the nation’s EEZ. It has its headquarters in Calabar, made up of 9 units under its jurisdiction.

The Central naval Command is responsible for the area from the Benin River entrance (Long 0050 00’E) to the Santa Barbara River entrance (Long 0060 30’E), encompassing the coastal states of Bayelsa, Delta, and Edo, and the landward states, including Kogi. It is headquartered in in Yenagoa, Bayelsa State and has 6 units under it.

The Naval Training Command (NAVTRAC) is the foremost command for training of officers and men in naval duties.

Its key functions are the coordination and harmonization of training doctrines and standards for all local training in the Nigerian Navy, as directed by the NHQ.

The autonomous units are those units such as the Nigerian Naval Dockyard, located in Victoria Island, Lagos which was commissioned on 27 August 1990, now takes care of high level maintenance, such as major overhaul of ships engines, additions and alterations, and modification of designs.

The Naval Shipyard in Port Harcourt was also acquired in 1990 and smaller ships of the Nigerian Navy and merchant ships are repaired there. They report directly to the Chief of Naval Staff.

The 101 Squadron was established in 1985, based at Navy Town, near Ojo. It operated Agusta Westland Lynx helicopters for anti-submarine warfare and search and rescue (SAR) operations.

It has also been operating Agusta 109 Helicopters from Warri Naval Base on anti-smuggling and oil protection duties.

Ranks of the force

Below are the ranks of commissioned officers of the Nigerian Navy with their symbols, starting from the lowest to the highest rank. 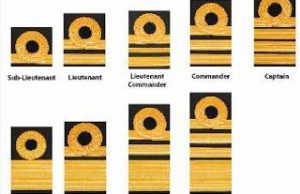 1. Sub-Lieutenant: This is the lowest commissioned rank of the Nigerian Navy. It is the rank to which officers are first recruited in the Navy from the Nigerian Defence Academy.

2. Lieutenant: This is the second rank of the Navy commissioned officers. It is the rank that officers recruited through the Direct Short Service start from.

3. Lieutenant Commander: This is the rank senior to Lieutenant but below Commander. It is a junior officer rank.

4. Commander: this is a senior officer rank and is superior to Lieutenant Commander but junior to Captain.

5. Captain: This is the rank senior to the Commander but junior to Commodore. It is the rank next to the ranks equivalent to Generals in the army.

6. Commodore: This is the lowest of the top officer ranks in the Navy. It is also the fourth highest rank in the Navy next to the Rear Admiral.

7. Rear Admiral: This is the third highest rank in the Navy and is equivalent to that of Lieutenant General in the army.

8. Vice Admiral: This is the second highest rank of the Navy equivalent to General in the army. This is only junior to the Admiral who is the highest in the Navy.

9. Admiral: This is the highest rank in the Navy and the officer of this rank is automatically the head of the Navy. However most Chiefs of Naval Staff have been appointed and are below this rank.

This is information on the ranks of officers of the Nigerian Navy with the symbols. The non-commissioned officers have not been provided because there is no information on their symbols so if you have the information please drop it here so that people can have access to it.

Contents on this website may not be republished, reproduced, redistributed either in whole or in part without due permission or acknowledgment.
.
Proper acknowledgment includes, but not limited to (a) LINK BACK TO THE ARTICLE in the case of re-publication on online media, (b) Proper referencing in the case of usage in research, magazine, brochure, or academic purposes,.
.
All contents are protected by the Digital Millennium Copyright Act 1996 (DMCA).
.
We publish all contents with good intentions. If you own this content & believe your copyright was violated or infringed, please contact us at [infoguidenigeria@gmail.com] to file a complaint and we will take necessary actions immediately.
Tags
Nigerian Navy Ranks Symbols

Nigerian Police Salary According To Ranks

10 Problems of Insecurity in Nigeria and Possible Solutions

10 Causes of Insecurity in Nigeria

How to Start a Security Company in Nigeria