History of the Nigerian Police

Nigeria Police Force is a very old organization that was founded in 1820. The first person to have the highest rank in all the police is commissioner general colonel KK.

After its establishment, an armed paramilitary Hausa Constabulary having 1,200 members was formed in 1879. This was followed by creation of the Lagos Police In 1896.

Another force, the Niger Coast Constabulary, was later formed in Calabar in 1894 under the newly proclaimed Niger Coast Protectorate.

Finally In the 1960s, these forces were first regionalised and then nationalised under the First Republic as the Nigerian Police Force (NPF).

The NPF carried out conventional police work and was responsible for internal security in general; and to support the prison, immigration, and customs services; and for performing military duties within or outside Nigeria as directed.

Although Police officers were not usually armed at that time, they were issued weapons when required for specific missions or circumstances.

Deployment was often done throughout the country but Babangida announced in 1989 that a larger number of officers would be posted to their native areas to facilitate police- community relations.

No report however was gotten as to how efficient this idea was in facilitating police work in the country. The NPF was reorganized into seven area commands all over the country In late 1986, which superseded a command structure corresponding to each of the States of Nigeria.

Each of these commands was headed by a commissioner of police and was further divided into police provinces and divisions under local officers.

NPF headquarters was itself an area command but was also responsible for supervision and coordination of the other area commands.

These Area Commands were later grouped under major Zonal Commands as follows:

Zone 1, with Headquarters in Kano, with Kano, Kastina, and Jigawa Commands

Zone 2, with Headquarters in Lagos, with Lagos, and Ogun commands

Zone 3, with Headquarters in Yola, with Adamawa, and Gombe Commands

The reorganization was prompted by a public eruption of tensions between the police and the Nigerian Army which led to the suspension of a superintendent for a time for grumbling that the army had taken over police functions and kept police pay low.

The then chief of staff of the armed forces announced a thorough reorganization of the NPF into the seven new area commands and five directorates (criminal investigations, logistics, supplies, training, and operations) each directorate and area command headed by a deputy inspector general.

Another reorganization of the NPF was announced in mid-1989 after the AFRC’s accepted a report by Rear Admiral Murtala Nyako who later became former governor of Adamawa State.

The NPF also created a Quick Intervention Force in each state apart from the mobile police units, specifically to monitor political events and to quell unrest during the transition to civil rule.

Each state unit which had between 160 and 400 police personnel was commanded by an assistant superintendent of Police and equipped with vehicles, communication equipment, weapons, and crowd control equipment, including cane shields, batons, and tear gas.

Ranks of the Police Force and their symbols

The following are the ranks of the Nigeria Police with their symbols arranged in ascending order of seniority. The rank of constable is the most junior and has no symbol so it is not included in this write up:

Second most junior rank in the force. It is the rank superior the rank of Lance Corporal.

This is the third most junior rank of the Police Force. It is superior to the first two and junior to Sergeant Major.

This is the fourth rank of the force and that is superior to Sergeant. It is the first rank that carries a symbol different from the first three. 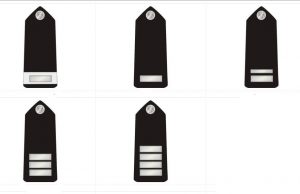 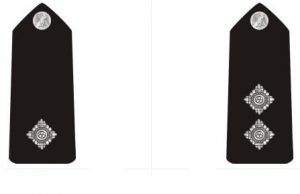 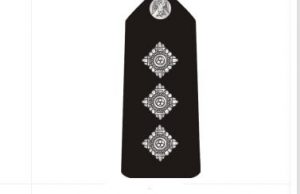 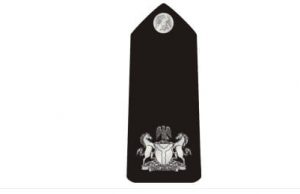 This is a senior officer rank which is the highest of the Superintendent and is the third highest rank in the force only junior to the Commissioners and Inspectors General. 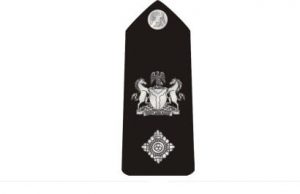 There are three ranks under this ranks and the highest in the Police Force as shown by the symbols below. The first badge is for assistant inspector general, the second is for deputy Inspectors General and the third is the Inspector General himself.

The Inspector General is the head of the Police Force and is appointed by the reigning president of the Federal Republic of Nigeria.

For those looking for information on the Police Force, I hope this helps you to find what you seek. Thank for reading.

Contents on this website may not be republished, reproduced, redistributed either in whole or in part without due permission or acknowledgment.
.
Proper acknowledgment includes, but not limited to (a) LINK BACK TO THE ARTICLE in the case of re-publication on online media, (b) Proper referencing in the case of usage in research, magazine, brochure, or academic purposes,.
.
All contents are protected by the Digital Millennium Copyright Act 1996 (DMCA).
.
We publish all contents with good intentions. If you own this content & believe your copyright was violated or infringed, please contact us at [infoguidenigeria@gmail.com] to file a complaint and we will take necessary actions immediately.
Tags
Nigerian Police Ranks Symbols


How To Register And Run A Private Security Company In Nigeria