The Royal West African Frontier Force (RWAFF) was formed in Nigeria in 1900. During the Second World War, British-trained Nigerian troops saw action with the 1st (West Africa) Infantry Brigade, the 81st and the 82nd (West Africa) Divisions which fought in the East African Campaign (World War II) and in the Far East.

The strength of the army rose from 18,000 infantry battalions and supporting units to around 126,000 in three divisions by the end of the Nigerian Civil War in 1970 although the functions of the Federal Nigerian army did not fundamentally change: its task remained to close with and defeat an organised enemy.

The Army is the most poorly funded arm of the Armed Forces and until recently, the military was generally under-resourced, with lower budgets than other organisations which were irregularly and unpredictably disbursed.

Military budget from 2000 to 2008 was less than 3 per cent of overall government expenditure. It was raised from 2009 to 2014 to an average of 7.2 per cent of government spending ($5-$6 billion); but this was still allocated disproportionately to recurrent expenditures, leaving very little for crucial capital investment.

Since 2015 the Nigerian army has embarked on a massive procurement of arms and modernization of the force which has taken the Nigerian army into the 21st Century battlefield with new modern weapons, better training and a new doctrine centred around information gathering, mobility and firepower. The army currently has over 6,000 officers and 150,000 soldiers.

Ranks of the Nigerian Army

Below are the ranks of officers and men of the Nigerian Army in ascending order of seniority starting from the non-commissioned (NCO) ranks. The lowest rank in the Nigerian Army is the Private which has no symbol so it is left out in this list.

This is the first rank of the army that has a symbol which is a rope the shape of a triangle. It is the senior rank to private, the first rank which is without a symbol and so is not included in this list.

This is the third rank in the army superior to that of a Lance Corporal. It is symbolized by two ropes the shape of a triangle.

This is the third rank which is a non commissioned rank. It is symbolized by three ropes the shape of a triangle. 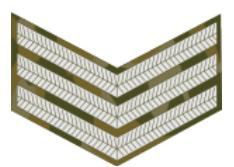 This is the fifth rank and the first senior non-commissioned rank. It is superior to Sergeant but junior to Warrant Officer. 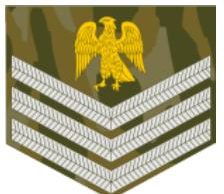 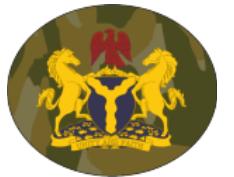 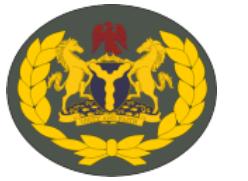 The most senior Non-commissioned rank of the Army. This is the highest rank attainable by any enlisted soldier before retirement. 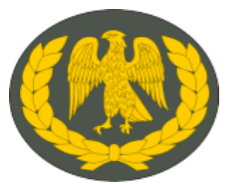 This is the most junior rank of the commissioned officer cadre. It is also the rank NDA graduates are commissioned into on graduation. It is symbolized by one star. 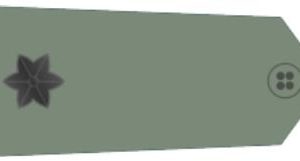 The second most junior rank. It is the rank officers of the Direct Short Service category get commissioned into on completion of their training. It is symbolized by two stars

This is the third rank of the commissioned officers. The captain is senior to the first two ranks but junior to the Major. This is also the highest junior officer rank. Their rank is symbolized by three stars.

The Major is a transition rank from the junior officers to the senior officers of the army. His rank is symbolized by an eagle.

The Lieutenant Colonel Rank is superior to the Major but immediately under the Colonel. It is symbolized by an eagle and a star. 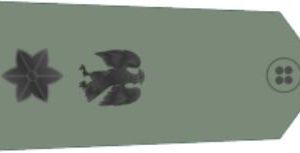 The Colonel is the rank just before the ranks of Generals. He is a senior officer and the sixth highest in the army. The rank is symbolized by an eagle and two stars.

This is the lowest General rank in the Army. It is the fifth highest rank and is symbolized by an eagle and three stars.

The Major General is a high rank in the army and the fourth highest. It is symbolized by an eagle and a sword crossed with a torch. 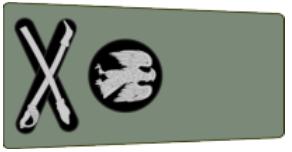 The Lieutenant general is a very high senior rank of the Nigerian Army. In fact, most top army officers who ruled Nigeria in the military stopped at this rank.

It is next to the General which is rarely attained so this is a pretty high rank. It is symbolized by an eagle, a star and a sword crossed with a torch.

This is the highest rank ever attained in the army and only very few officers have attained it. All Chiefs of Army Staff have risen up to this rank as the maximum. The rank is symbolized by an eagle, two stars and a sword crossed with a torch. 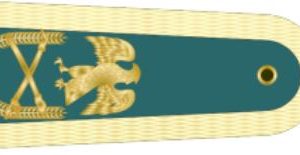 This is the highest rank in the Army and is the only rank that has never been attained in Nigeria. no serving or retired army officer has ever risen beyond the rank of General because according to sources, anyone who attains this rank may be able to do as he pleases and become a dictator so officers are retired before they ever get to the rank. 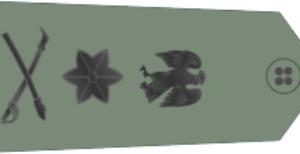 Read Also: List Of Army Barracks In Nigeria And Their Locations

The above information gives every detail concerning ranks in the army. I hope the information helps and feel free to add comments or details you think were left out of the list. Thanks for reading.

7 Things To Do After Graduation In Nigeria

Nigerian Police Salary According To Ranks